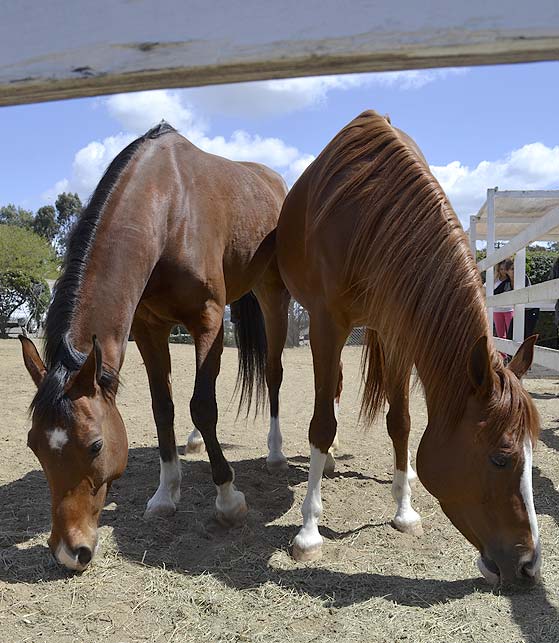 In only 6 short years, Sunny and Angel have certainly made their mark in the community and our hearts!  It has been a joy to watch them grow into the healthy, happy, and playful horses that they are today.  Each year, we reunite the two here at the Center to celebrate their lives and see how they’ve grown.  We look forward to continue following them in their incredible journey, and invite you to join us!  Read more about them here, see videos on our YouTube page, and join the Sunny & Angel mailing list to be the first notified of special information and events about your favorite twin foals!

The Family
Mom: The mom’s name is Lena; She is a Registered Quarter Horse and Sunny and Angel were her first babies!  She had them when she was 9 years old.
Dad: Sunny and Angel’s dad is an Arabian, making the siblings Arabian/Quarter Horse crosses.
Sunny: Lena’s first born was Sunny, male horse, also called a colt. His coat coloring is called “Bay” meaning his body is brown, and his mane, tail are black.  He also has a white star on his forehead, and snip on his muzzle.
Angel: Lena’s daughter, who was born second and is a female, also called a filly.  Her coat coloring is called “Chesnut” which is a reddish-brown, with a similar colored mane and tail.  Her face marking is called a “blaze”, and is the most common form of horse face markings.

Birth Information
Lena gave birth to Sunny and Angel on Sunday, March 28th, at 5:00am. Lena’s owner did not know she was giving birth to twins until it happened! After that, the horse family was transported to Helen Woodward Animal Center’s Equine Hospital, where they could be monitored for state of the art, around the clock care.

The Humans
Dr. Rodrigo Vazquez: The family’s veterinarian, and one of the main practicing equine veterinarians here at the Center. He would visits the family daily to oversee their health and progress.
Christen Hanley: Director of the Equine Hospital, she also spent lots of time with the family, checking vitals and ensuring Lena, Sunny, and Angel received the care recommended by Dr. Vazquez.

Seeing the foals
When the babies were first born, a live-stream camera was hooked up in their stall so that people could watch the foals from their homes. When they became old enough to be weaned from their mother they were adopted by a local resident.  Each year for their birthday, Sunny and Angel are brought back to the Center for a celebration.

If you would like to be added to the Sunny and Angel mailing list to be notified of future events, or if you have any questions, send an email to SunnyAndAngel@animalcenter.org.