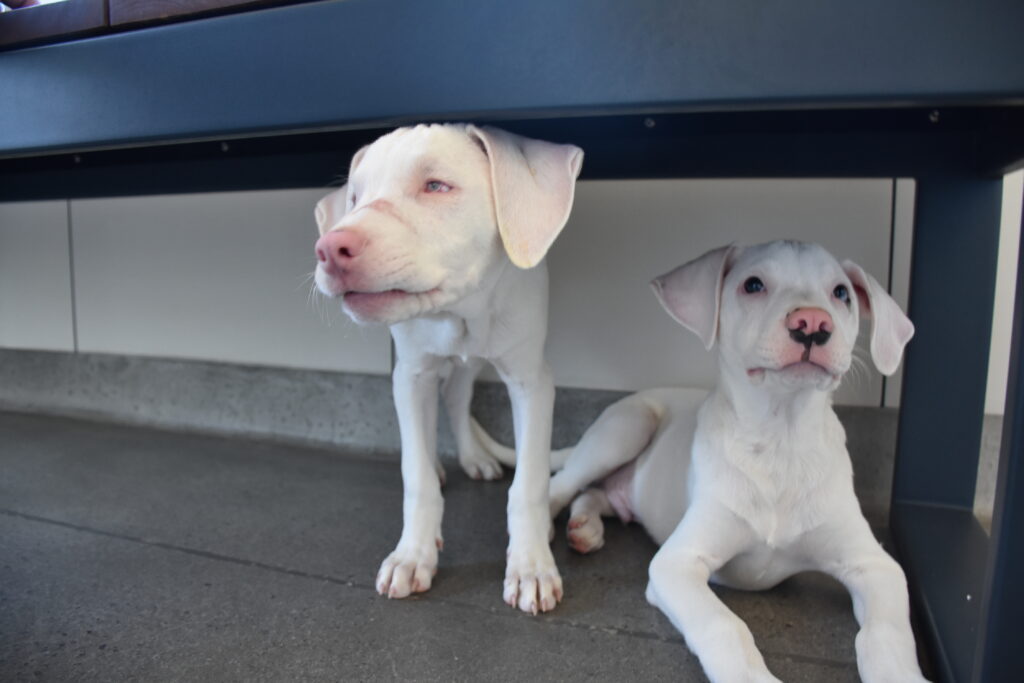 Rancho Santa Fe, Calif.  (Feb. 24, 2020) – It has often been said that “love is blind” but at Helen Woodward Animal Center two pups are displaying that colloquialism in its truest form.  In fact, the two 3-month old terrier-blends who arrived at the Center only two weeks ago have demonstrated a bond unlike any seen at the Center before.  The female pup named Star is deaf and nearly blind, and her brother Denver has taken on the loving role of being her guide.

On February 11th, Star and Denver arrived at Helen Woodward Animal Center via transport from a new rescue partner – Heart of Louisiana. The pups were part of a litter of 8 whose mother had been dumped in a rural location.  A couple who found the mother kept her with her babies and, once weaned, asked the southern rescue facility to help find good homes for her pups.  The litter, along with 31 other rescue puppies, traveled 1,900 miles to reach sunny San Diego and nearly all of the transfers were ready for adoption in little more than a week.

However, Helen Woodward Animal Center staffers soon realized that Star had special needs.  Deaf and nearly completely blind, Star was learning how to make her way in the world by use of her other senses.  While the rest of her littermates frolicked without her, her brother Denver kept a protective eye on her.  Choosing Star as his main playmate, the two were rarely apart and when separated, Denver would come running back to love on Star and let her know he was there.

“It’s really extraordinary,” stated Helen Woodward Adoption Services Manager Dora Dahlke.  “We never stop learning from animals.  These two really can teach us all a thing or two about sibling love and how much we can achieve with the love of a good friend.”

Star and Denver will be adopted out as a bonded pair.  They will be available for adoption on Wednesday, February 26th.  As a part of their adoption, San Diego Pet Training’s Rob Kuty will be on hand to provide the new family with techniques on how to raise a special needs puppy.  One thing is certain, Denver will be right there to help show his new family how wonderful his sister really is.

To adopt Star and Denver or for more information on Helen Woodward Animal Center, please go to www.animalcenter.org, call 858-756-4117 or stop by at 6461 El Apajo Road in Rancho Santa Fe.