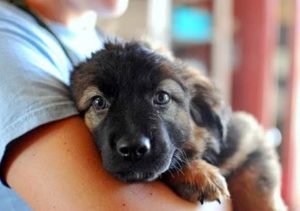 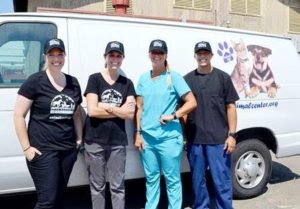 Helen Woodward Animal Center’s vet techs have been up since 2am Houston time and have already had a long day of assisting with the unloading of orphan pets and giving them their necessary medical exams.

They are in constant contact with us and tell us the work is hard but incredibly rewarding. 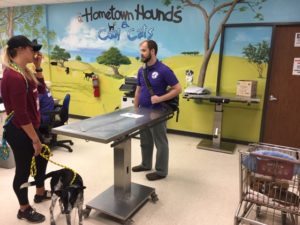 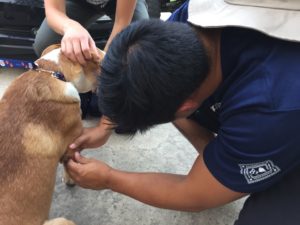 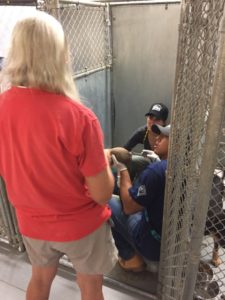 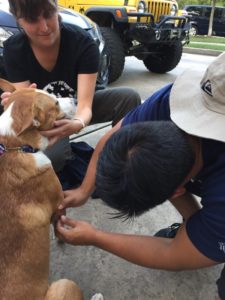 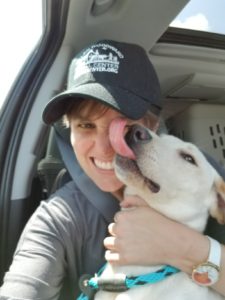 Rancho Santa Fe, Calif.  (August 31st, 2017) – Before most San Diegans had even risen from their beds this morning, four staff members from Helen Woodward Animal Center were boarding a Southwest® plane, bound for Texas.  With the Houston-Hobby Airport remaining closed, the flight was Austin-bound with an SUV ready to drive the group to the Lone Star Convention Center where Montgomery County-based rescue organization – Operation Pets Alive! – had set up an emergency shop.  There, 100s of orphan dogs and cats pulled from devastated Houston shelters are waiting for rescue and Helen Woodward Animal Center is ready to assist.

The destruction caused by Hurricane Harvey has captured the media spotlight globally for days, depicting unimaginable loss and nightmarish scenarios few can imagine. For the staff at Helen Woodward Animal Center, however, the tales have a ring of familiarity to them.  In 2012, Center staff welcomed 60 orphan dogs and cats from New Jersey (who had been stranded in underwater shelters during Hurricane Sandy), via a donated charter from Southwest.  Similarly, in 2005, the Center aided with the transportation and placement of Hurricane Katrina animal victims.  The impact of helping those who were unable to help themselves, orphan dogs and cats facing displacement and possible euthanasia, made its mark on all who had a hand in it.

“You look at all of those faces and know that their stay at the shelter was meant to be temporary,” stated Shorey.  “It was supposed to lead them to forever homes.  But when something as devastating as a hurricane hits, so much has to be left behind.  People lose their homes, their possessions, and just focus on survival.  And those orphan pets are left behind too.  You realize how much of a difference you can make and how many lives you can save.”

Helen Woodward Animal Center’s rescue of Houston pets was initiated by a call for help from Operation Pets Alive! – a non-profit, all volunteer organization “striving to elevate Montgomery County to a No-Kill Community.”  Helen Woodward President and CEO Mike Arms immediately agreed to assist.  As in 2012, Southwest also jumped in to donate the use of a plane, with Southwest Employees donating their time, all for the extraordinary rescue.

“These are the silent victims,” said Arms. “There are shelters that have been devastated by Hurricane Harvey, without electricity, without supplies.  Operation Pets Alive! has taken in an overwhelming number of orphan dogs and cats who had inhabited those shelters before the storm and were suddenly facing euthanasia simply because they had no place to go.  We are honored to help save those lives and we are lucky to have incredible friends like Southwest to help make this all possible.”

“The devastation of Hurricane Harvey has impacted a number of our communities along the Gulf.  Our hearts are with our Customers, Employees, family and friends who have experienced loss and devastation from the storm,” said Linda Rutherford, Southwest Airlines Chief Communications Officer.  “We’re so happy to partner with the Helen Woodward Animal Center to extend hope to Houston by transporting shelter animals to a new home in San Diego, while making additional space for family pets whose humans are currently displaced.  Our Employees care so deeply for our Customers and all those impacted by Hurricane Harvey, including our sweet little four-legged friends.”

HOW YOU CAN HELP:

Helen Woodward Animal Center is also sending a $5,000 donation to Operations Pets Alive! to assist with the continued orphan animal rescue efforts and encourages other to make a donation to the organization as well.

To assist the Houston arrivals here in San Diego, Helen Woodward Animal Center asks for the donation of towels and blankets.
The public is also invited to greet the orphan pets as they arrive at the Center – 6461 El Apajo Road in Rancho Santa Fe – on Tuesday, September 5th.  (Arrival time TBD.)