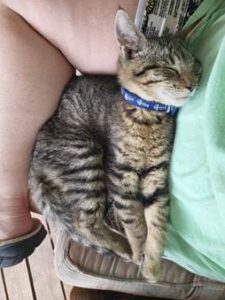 “I’ve had a lot of changes in my life recently and was feeling lost. A friend happened to mention a kitten at the shelter and how playful he was. It was love at first sight. He’s the missing piece for my heart and in just a couple days I no longer feel anxious. When he snuggles up to me I can feel my worries melt away a bit…” 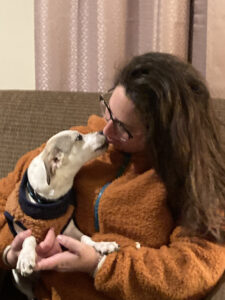 “To be honest, I didn’t think I’d find a friend like Baxter ever again. His sudden death broke my heart. Almost a year later I started looking at adopting another dog. I missed the tap taps of nails on the hardwood floors. The cuddles. The ‘YOU’RE HERE!’ that only a dog greets you with when you return home… even if you’ve only been away for five minutes. When I saw Autumn’s face online, my heart healed a little. Her soulful eyes got me and I knew she was the one. She’s a completely different dog than Baxter, but makes me feel loved just like he did. We’re both learning and settling in. I give her nighttime snuggles, socks to steal and Blue Buffalo puppy food three times a day. With every kiss and snuggle she’s not only mending my heart, but giving it a new reason to beat. Thank you to the Midwest Dog Rescue Network who fostered her until we found each other!” 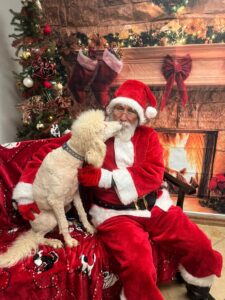 “Mr. Darcy was a breeder cast off because he had a herniated umbilical cord and the breeder had not been able to sell him for top dollar. From the first night, he snuggled up to my husband that has terminal cancer.  Mr. Darcy has become such an integral part of our lives.  He provides the love and most importantly the laughs that we need as our family fights this cancer battle together. Our 9-year-old son said, ‘I think that Mr. Darcy was sent just to help Daddy.’ After fostering him for a few months, we knew that though we had fostered over 200 dogs in the past 5 years, Mr. Darcy had chosen us as his forever family.  On December 11, we made it official and adopted him. For his adoption pics, he took his pic with Santa.  He kissed Santa and thanked him for his forever family before Christmas.”